One more handy feature is now out in your
Android task manager MyLifeOrganized – Promoted Action or Floating Action Button.

So what is the purpose of this button? As a rule, it takes some time to reach frequent actions, and to select them in the bottom menu requires several taps. What is the solution if we process several or even multiple tasks? As you may guess, this is the Floating Action Button, which allows to perform an action with one tap.

Promoted action is now on by default, so you will notice a green circle on the task list screen. 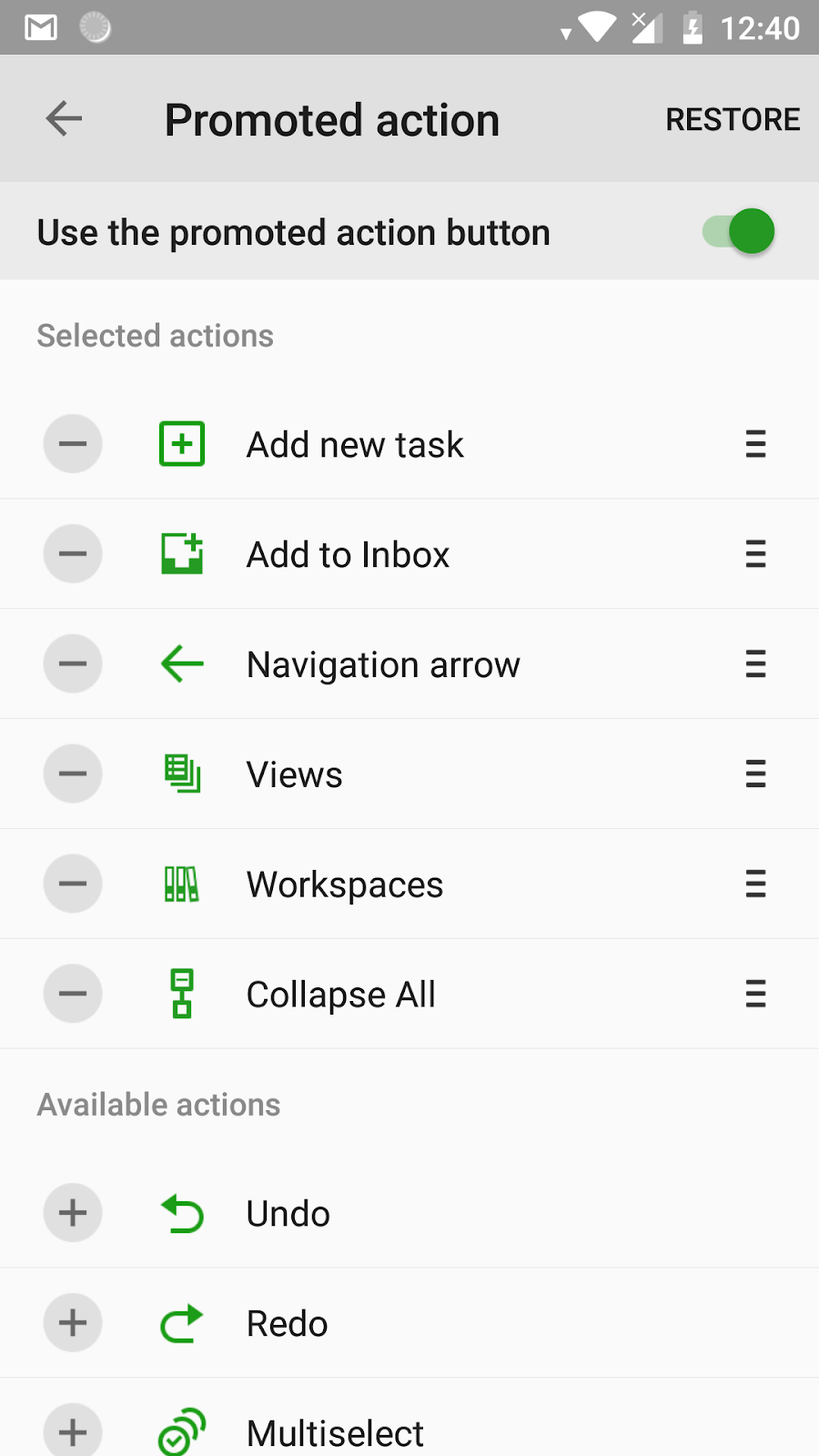 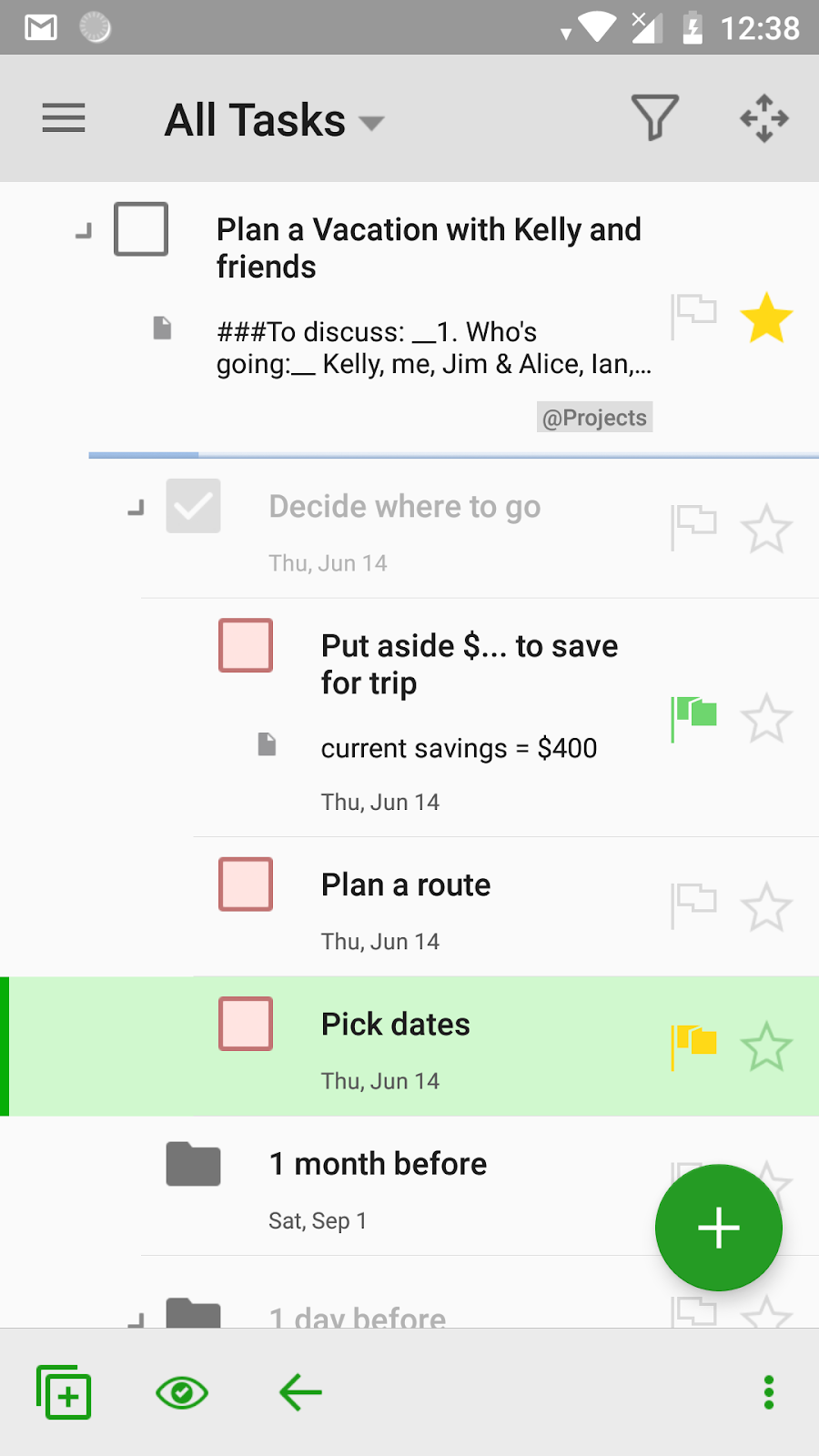 Note. There is one point you may notice: the Promoted action button disappears after you scroll the list to the bottom. This was designed to ensure that the button does not obscure the task and its properties, such as flags and stars, and does not prevent you from managing it. The button will reappear if you start to scroll up.

So, basically Promoted action is the button of the most frequent action. In other words, its main function is to represent the action which is used most frequently among the list of featured actions. In most cases it is the “Add task” action, but you can choose any action you use the most.

Moreover, this is a pane of quick access actions that expand after a long tap. Here is what you will see when you open your active view and long tap the promoted action — more actions expanded and you can choose new action quickly: 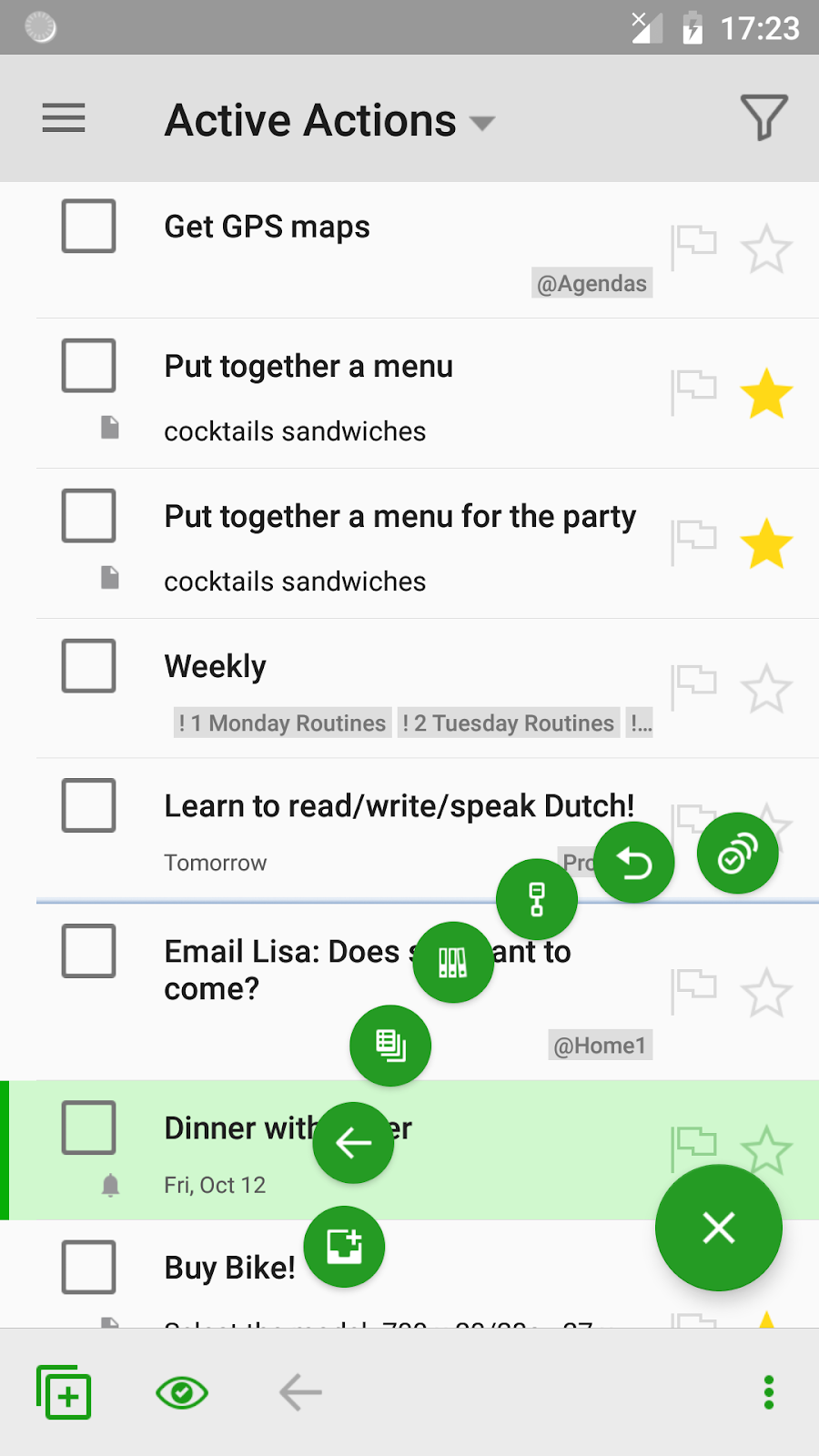 Tip. The pane being open, use long tap again with the cross to configure selected Promoted actions.

If you long tap again you will be switched to the configuration of the Promoted Action button. Let us consider its settings in detail. First, you can configure the list of selected actions by moving them from the “Available actions” with a plus, and move back by tapping a minus. This creates a huge space for imagination — you can configure and choose your own combinations, as well as plan complex tool panes. Please mind that the number of actions shown depends on the size of your screen, so you will see only the first several actions from the list after you long tap the floating action button.

If you are not happy with your selection, you may use “Restore” button to retrieve the default set of actions, as well as move actions by tapping on the right beside the action: 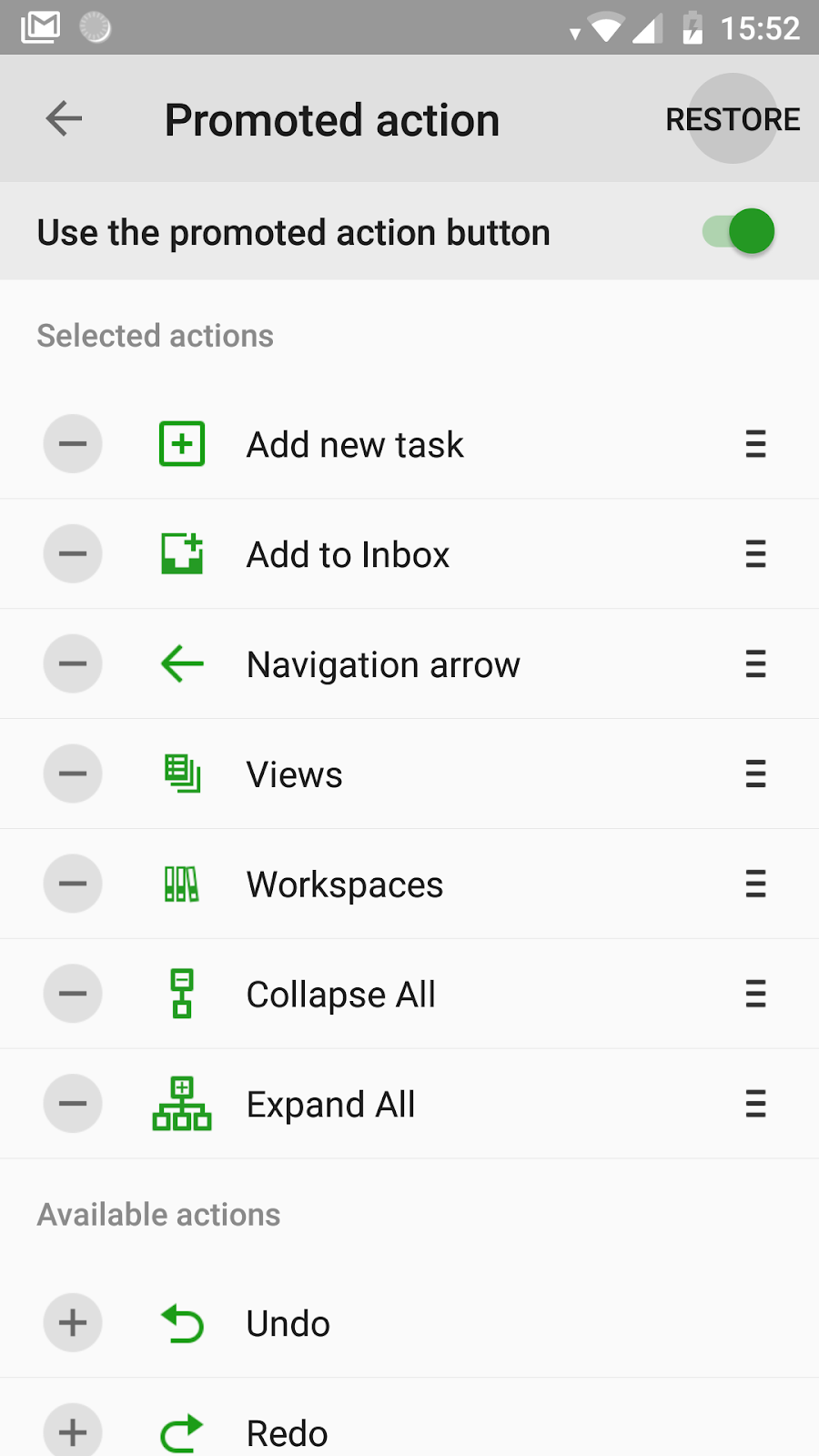 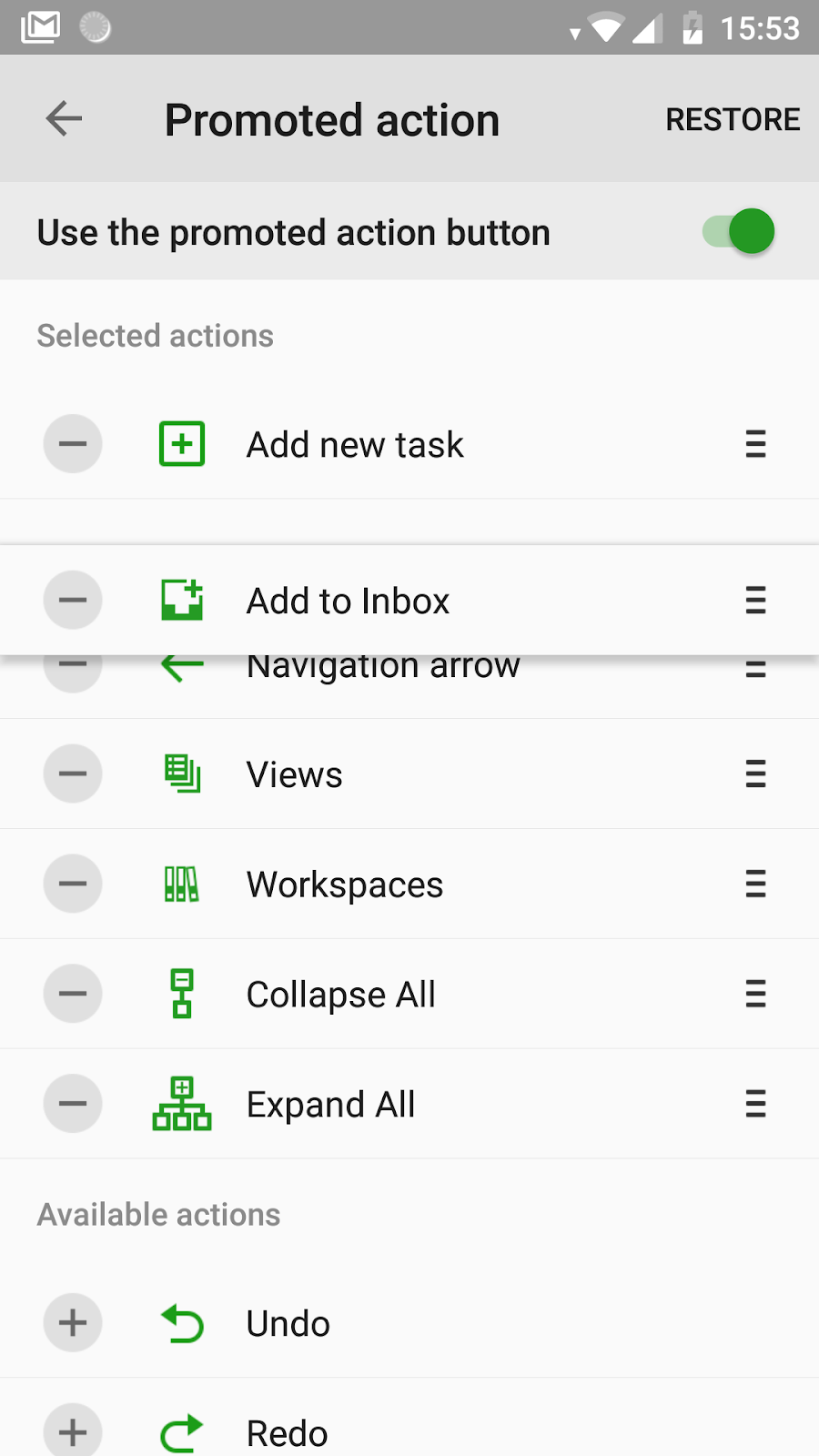 Tip. When dealing with any promoted action from the pane, the main green button memorizes your last choice.

We have no doubts that you’ll duly appreciate this new feature and accelerate your interaction tremendously. Just try it yourself. Please share your impressions with us as well.

Tip. You would need to run the Pro version to use this feature.

The MyLifeOrganized team
Life is easy when organized

New options for views in…